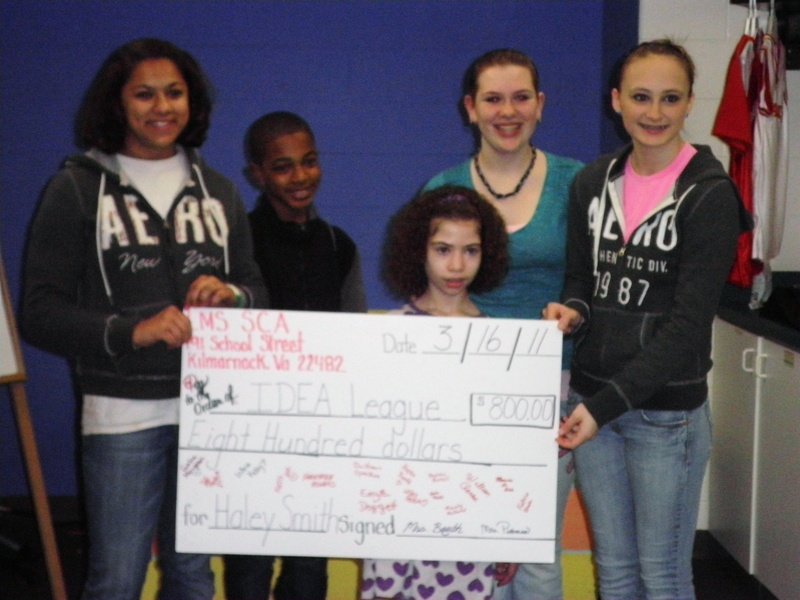 The Lancaster School SCA presented Haley with a check  for $800.00 in her honor.  The SCA hosted a  "Social" for their classmates with the Haley Smith Fund as the charity of choice for this year.  Mrs. Tara Booth stated that in her nineteen years of holding a fund raiser of this sort, this is the largest amount they have ever raised".

They presented the check to Haley during their "Morning announcements/TV news".  Of course, I cried when they presented the check.  I am continually humbled and honored to be living in such a compassionate community.  During the week before the social, I would be taking Haley to her classroom and I could hear the kids whispering, "that's the girl who we are raising money for".  Along with the whispers came more acknowledgement of Haley with smiles and waves.  After she was presented with the check on "TV", one young man saw her later and said, "Congratualtions".  The following day a young lady who we do not know waved to her and said, "Hi, Haley!"  More tears from me!

A few weeks ago in our local paper there was a letter to the editor that said they had not seen more ruder kids than this particular middle school.  In some regards I did agree with the writer of the editorial, some kids can be rude.  But I think we have to be careful to typecast and label these children.  What they did for Haley was far from rude.  Child learn what they live.  I appreciate those who made this very generous donation to Haley's fund.  One mom told me how she had given her nine-year old daughter $10 for the social and her daughter took $12 of her own money as well.  When her daughter got home she said, "Mom,...I'm broke!...but do you know what?,....it was for a good cause..."  Oh so touching...and more tears.