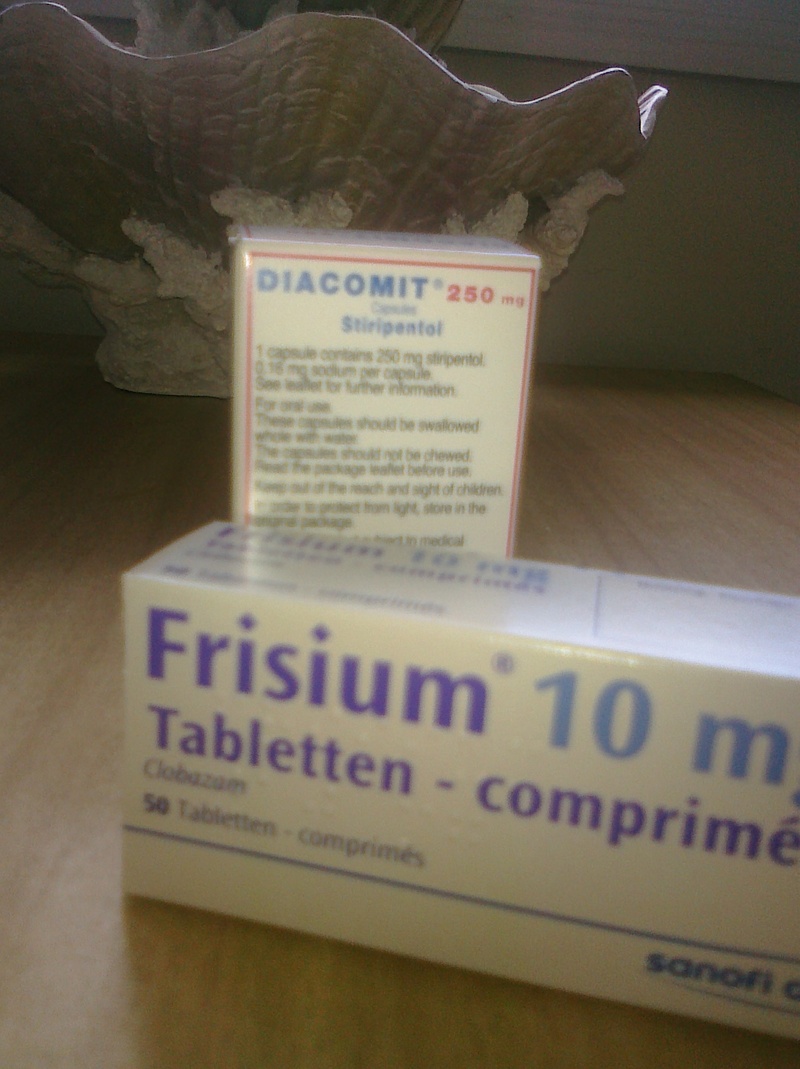 After years of talking about the elusive drug, Stiripentol (Diacomit), we finally have it in our possession!!  It has been a long and involved process to secure the drug and have it fully funded for Haley.  We pray that it will give Haley some relief from the almost daily generalized tonic clonics that she has been experiencing lately.

We first heard of Stiripentol shortly after Haley received her diagnosis of Dravet syndrome four years ago.  We saw it on the IDEA League Family Forums.  It was a drug that produced in France and available in Europe, but not the USA.  At the time it had just had a huge price increase in the cost of the drug.  There were many families that were able to import this non-FDA approved drug.  Some had miraculous effects and others did not have great success.  We were shown the what, how, why and where to get the drug IF our doctor would write the prescription.

Back in 2008, we did not think it was going to be possible to get the drug for Haley and we thought it also was more beneficial to the kids who were suffering from "Status Epilepticus", a seizure lasting 30 minutes or longer or clustering of seizures with no consciousness in between.  Since Haley had not had an episode like that since 2005, we did not push the issue to get the drug.  However, time went by and we tried and failed new drugs and the prescriptions she was on were not giving her much of a break seizure-wise.  Lately the longest we go without a seizure is 2 or 3 days.

In 2010 we decided we wanted to try the "magic" combination that has been known to work for children with Dravet syndrome.  We heard it at the IDEA League 2008 Family and Medical Conference and then again in the 2010 conference, Stiripentol, Frisium (Clobazam) and either Depakote or Topamax was the combination that works for some Dravet kids.  So we began our quest to get these non-FDA approved drugs.

Just an aside, both drugs are available in the USA because they have orphan status.  An orphan drug is a drug that has shown to help a rare disesase or condition.  Since these drugs serve a small population, there is not a huge return on investment for a pharmaceutical firm to put out all of the money for clinical trials.  Basically it all comes down to the almighty dollar.  So sad....  However, Frisium is about to be approved in the fourth quarter of this year.  It will be rebranded as "Onfi" and available in the USA.  The clinical trials for the drug were focused on individuals with Lennox Gastaut syndrome a much larger population than Dravet syndrome.  We are so happy that the drug will be approved by the end of the year.  Stiripentol is another story.  So far the ONLY group Stiripentol has been beneficial for is Dravet syndrome.  Haley's doctor was helping to advise the IDEA League with getting the drug started with the FDA approval process said that the data supplied by the European studies would be "laughable" to our FDA's strict procedures.  Unless we can find another group that would benefit from the use of this drug, it will not be approved any time soon.  It is just not cost effective.

In 2010 we were able to finally get our doctor to write a prescription for Frisium.  We were going to pay for it initially out of pocket, an expense of nearly $300 a month.  Fortunately with the help of the IDEA League and other parents who have traveled down this road, we were able to get the drug approved by our primary insurance company.  Surprisingly, it required very little effort.  I guess when you send the insurance company a 20-page packet with the documentation on how the drug has helped other Dravet children and various approval letters from their own counterparts in other states, they have little to deny!  In April of 2010 we started weaning Haley from Klonopin, a drug that is similar to Frisium, but has more adverse side effects, to Frisium.  The wean from Klonopin was supposed to be very difficult and we did it painfully slow.  I am happy to say, we had very little adverse effects and Haley came through the drug "exchange" a more vibrant little lady.  With the addition of Frisium, we saw more spontaneous language and more personality.  We were so happy and ready now to tackle Stiripentol.

In the summer of 2010, I contacted Haley's old neurologist who is now a state senator too!  Lucky us!!  He agreed to help us with our endeavor to get the drug approved through Virginia Medicaid.  Stiripentol out of pocket is very costly.  A month's supply could cost well over $1000.  We just do not have the money to put out in advance.  Her old doctor is a true Southern gentleman and a wonderful advocate.  He sent the letter in the the agency in July and rumors were heard that Stiripentol was covered in Virginia by August.  We even heard from the pharmacy in NYC that they had become an "approved provider" for Virginia.  It all sounded so promising!!  Sooooo we waited and waited to hear an official confirmation....and it never came.  Summer slipped into Fall and right before Thanksgiving the pharmacy called and said, "all we are waiting for is a coding form to know how to bill".  I was seriously doing a happy dance, jumping up and down...so excited!!  Then right before Christmas, the pharmacy called to say, "I don't know what happened, Virginia is now saying 'NO'".  Immediate deflation...  Shortly after the holidays we learned that the reason for the "No" was because it WAS NO A FDA APPROVED DRUG!  Well, duh!!  That is why we wrote them in the first place!!!

In 2011 we started again.  I contacted her old neurologist, and he made some calls.  We hear once again from the pharmacy in NYC and they say, "We spoke to someone from VA and they are very apologetic, the just realized it was an orphan drug".  So we were back in the holding pattern waiting once again for the process and coding for billing.  Long story short, on Thursday, I called the pharmacy around 2:30 PM again to ask IF they had received what they needed from Virginia.  The answer was no.  So I called Virginia and actually spoke to a person and not an answering machine.  The ball started rolling and it quickly picked up speed, by 3:30-4:00 PM, we had new prescriptions, payment was guaranteed and next-day air was promised!!  Woo hoo!!!

So on Friday afternoon, I walked into my house to find a small box about 8x8x8 was sitting on my table.  I literally picked it up and hugged it and then ripped into it!!  We are so excited to finally receive this medication and we pray that it will provide relief for Haley and our family.  This has been a long, tiring journey.  But every day we are encouraged by new friendships, gestures of compassion and the others that have traveled this road before us.