Haley's video story and other thoughts

As I see so often posted in blogs...wow, it has been awhile since I last wrote...  Time flies when you are having "fun".  Well, not really that much fun, but life is happening and there is little time to write.  So much has happened since my last post, let me catch you all up to date.

I had my first try at making a video of Haley's Dravet story.  It was a bittersweet experience.  I think it was the first time I dug through files of photos and looked at old videos.  I would look at the dates on the media items and think to myself, "just two more days and your world will be rocked by Haley's first seizure."  Then it was, "Wow, that photo shoot was just after Haley got out of the hospital, I can see where the I.V. lines were run in her arm".  It was amazing how difficult we thought life was back then when she only had five seizures in the first year.  Now five seizures in a day is nothing.  It was also difficult, but reaffirming to see that she could run and do so many things with coordination when she was younger.  Now she has lost those abilities.  She was such a delightful, happy child with a great sense of humor!  I am very pleased with how the video turned out.  I hope it will go on to raise awareness for Dravet and dollars for research.

We went to see Dr. Pellock in October and we thought we would be coming off the Klonopin. Instead we have decided to wean Haley off of the Banzel by lowering her dosage a half a pill every two weeks. It will take us two months total to remove the drug completely. She is on the last half-pill dosage for the next two weeks. We have seen a decrease in the complex partials and daytime seizures. Her "normal" now is to go 3-5 days and then have a seizure in the morning before she wakes up and one again in the evening before bed. It is sad when you start to predict them. Our plan next is to look at another new medication, Vimpat. It is designed for complex partials and is approved for people 17 and older. Dr. Pellock was willing to campaign for our insurance to cover it; he thought they would deny it because it was not approve for her. Now that she is not having many we will probably look to another avenue.  We go back to Dr. Pellock on December 15th.

Haley has also started a new school this year.  I believe when I posted last we were in IEP (Individualized Education Plan) discussions.  She is enrolled in the Northern Neck Regional Special Education Program that is housed in Lancaster Primary School.  She is able to attend four days a week for two hours a day.  She absolutely loves her teacher, Mrs. Woolard, and going to her "new school", as she says.  I think she is happy to do something without her brothers and she LOVES all the one on one attention.  We are very pleased with everything so far!!!

Haley's feet have continued to collapse and pronate (roll inwards).  This is a co-morbid condition with Dravet syndrome.  I was contacted by another mom/mum of a Dravet child whose daughter had surgery on her feet this past summer.  It was a success and her daughter is able to walk better.  Haley right now can not walk far distances.  She zig-zags as she walks and throws her feet around.  She almost tripped me today as I was walking too close to her.  We met with her orthopedist in September to discuss surgical options.  He is a wonderful doctor with great bedside manner.  We discussed the situation for "over 25-minutes" (he put that in his notes) and ended with a possibility for surgery and a follow up appointment in January.  His reservation is that he may have to do the surgery again down the road for her.  On Monday, November 23rd, we are heading to UVA to get a second opinion.  I don't think they have ever heard of Dravet syndrome there...we will be the ambassadors once again.

One positive thing about having a rare syndrome is that you instantly connect with other parents living in the same world.  I had the honor and pleasure of meeting a dad of another child with Dravet at the Marine Corp Marathon in October.  Derek Amson, Riley's dad, traveled from Crewe, England to run in the 26.2 mile race.  He did it as a fund raiser for the IDEA League.  It was an entertaining visit with him and his friend, Andrew Cotton.  We met the night before the race, had dinner, and he bestowed upon me lovely gifts of chocolate!!!  YUM!  Then I brought Haley and my parents to meet him at the finish along with Andrew. 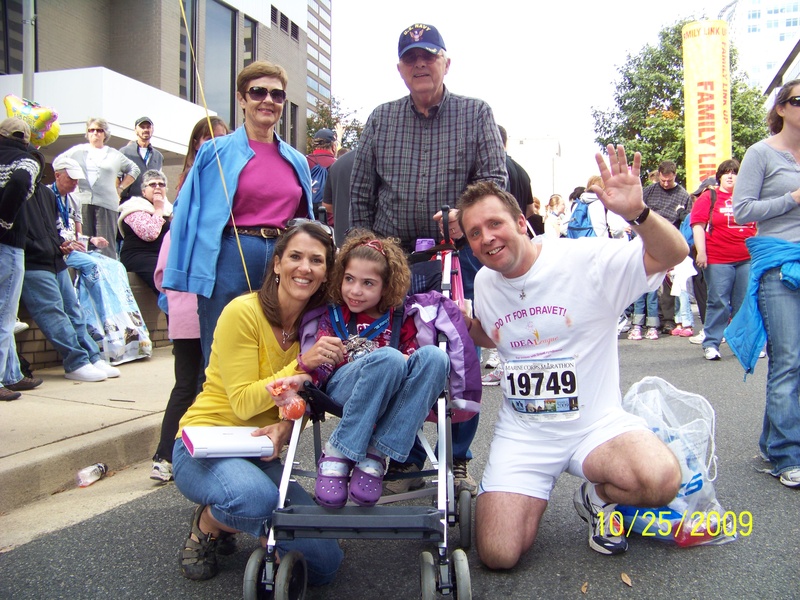 It was so inspiring to see all the runners at the event, it really made me wish I could run one.  SOOOooooo, I wrote that on the IDEA League's family forum and have been challenged by another mom to do that next year.  We will see.  I am going to sign up for my first half-marathon next year, Nicole....!!!!

Another Hero for Haley:

Jamilah Sawyer, the guidance couselor at Haley's school, also ran the Marine Corp Marathon.  I know her from the YMCA and see her nearly every morning at 5:30 AM.  She totally surprised me and touched my heart with her generous, selfless spirit...she presented Haley with a gift bag a couple of days after the marathon.  I never in my wildest dreams could have known what was inside.  When I came back to school to pick up Haley, tears rolled down my face when I learned Jamilah gave Haley her Marine Corp Medal.  She has such a good Christian heart and wrote the most lovely letter to Haley. 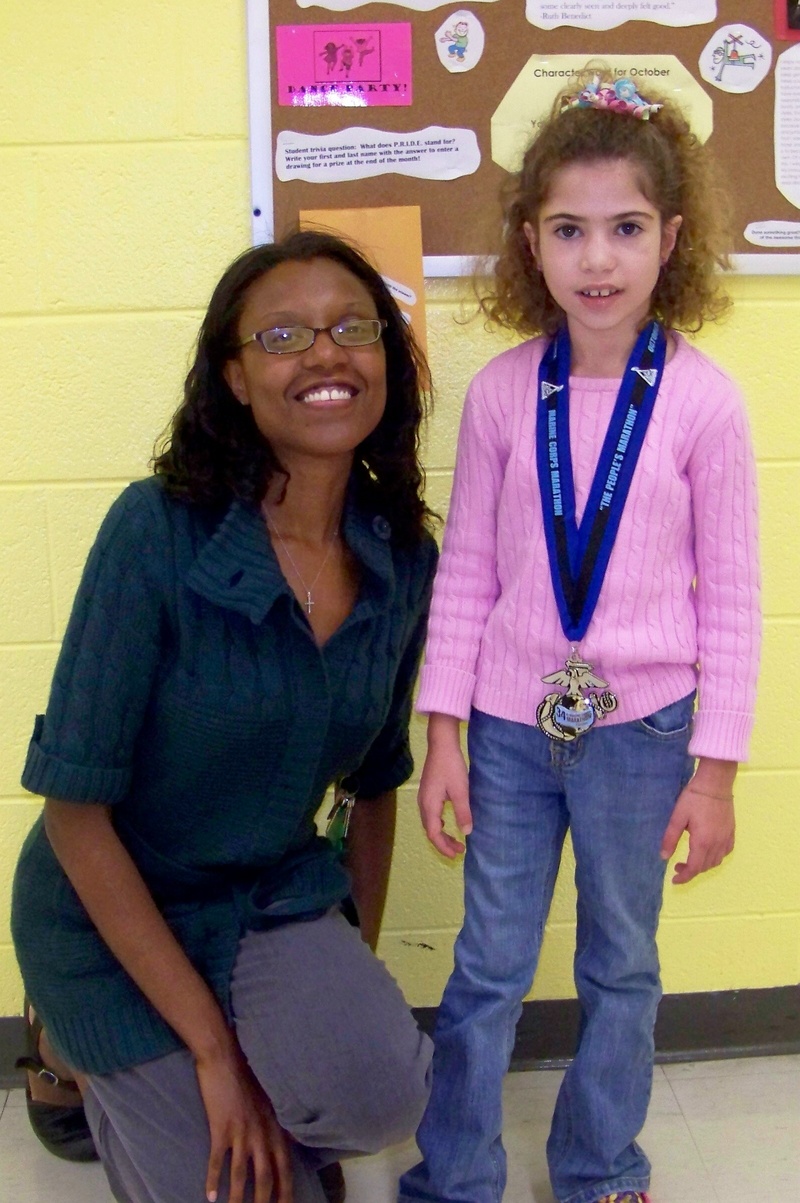 Haley is probably the only nine year old that has worn two Marine Corp Marathon Medals from two different participants that live on two different continents.  But how amazing a little bit of ribbon and metal can tie together so many people.  These are the moments I cherish in the difficult times.

Awhile back I posted on my Facebook status, "I wish I could have a day that I did not have to think about seizures"....later in the day I realized that if that day came, there either would have been a cure, or I would not have my Haley here on this earth.  So in light of Thanksgiving looming ever so close,...I am thankful for the seizures and having Haley in my life, I am thankful for the moms/mums and dads that I have met on this journey, and I am thankful for so many who have joined us in our fight to raise awareness and funds for Dravet syndrome.

Oops, you forgot something.

The words you entered did not match the given text. Please try again.